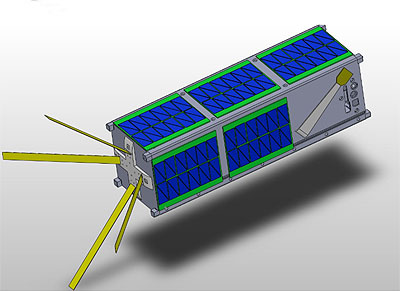 NMTSat (New Mexico Tech Satellite) is s 3U-CubeSat developed by the New Mexico Institute of Mining and Technology with the primary goals to monitor space weather in low Earth orbit and correlate this data with results from structural and electrical health monitoring systems.

NMTSat serves three main purposes. Its primary purpose is educational, providing undergraduate and graduate students with the chance to work on a real world problem. The secondary goals are scientific and experimental. The scientific mission is to research space weather by using onboard instruments such as the Langmuir plasma probe and structural and electrical health monitoring systems.

NMTSat will only be in orbit for approximately a month in order to obtain all necessary data for correlation, although any time longer than this is beneficial and could allow for the collection of more interesting data.

NMTSat is New Mexico Techs first nano-satellite constructed as a 3U CubeSat fully in-house and almost entirely by students.

In February 2014, NMTSat was selected by NASA for a sponsored launch under its Educational Launch of Nanosatellites (ELaNa) Program. It was launched on the ELaNa-19 mission.