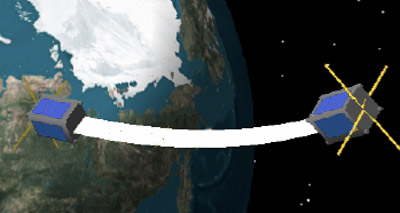 CubeSail is a cubesat mission for upper atmospheric research designed and built by the department of Aerospace Engineering at the University of Illinois at Urbana-Champaign.

The CubeSail mission is a low-cost demonstration of the UltraSail solar sailing concept, using two near-identical 1.5U CubeSat satellites to deploy a 260 m-long, 20 m2 reflecting film. The two satellites are launched as a unit, detumbled, and separated, with the film unwinding symmetrically from motorized reels. The conformity to the CubeSat specification allows for reduction in launch costs as a secondary payload and utilization of the University of Illinois-developed spacecraft bus.

The CubeSail demonstration is the first in a series of increasingly-complex missions aimed at validating several spacecraft subsystems, including attitude determination and control, the separation release unit, reel-based film deployment, as well as the dynamical behavior of the sail and on-orbit solar propulsion.

It was selected in 2012 by NASA's CubeSat Launch Initiative (CSLI) to be launched as part of the ELaNa program. It was successfully launched on the ELaNa-19 mission on an Electron KS launch vehicle.