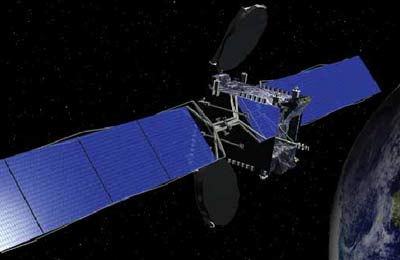 Orbital's StarBus satellite platform, which is designed for 15-year missions in geosynchronous orbit, is compatible with the Delta II, Ariane, Proton and Long March launch vehicles. The structure consists of a rectangular body with a central composite thrust tube housing the apogee kick motor. Payload equipment is mounted on the north and south side panels and on the nadir-facing deck providing excellent fields of view for Earth-viewing instruments and for thermal radiators. Articulated sun tracking solar arrays are deployed in two wings from the north and south faces of the spacecraft.

Originally designed for geosynchronous telecommunications applications, StarBus can be adapted to technology demonstrations and Earth and space science programs such as GOES. For ten-year missions launched on a Delta, payloads up to 200 kg and 555 W can be accommodated, with growth possible for shorter missions. Standard interfaces and protocols such as MIL-STD-1553, CCSDS and 28 V power simplify integration.

StarBus is designed for missions up to 15 years in duration. The propulsion system is sized for ten years of stationkeeping in geosynchronous orbit. Built-in radiation hardness for the severe geosynchronous environment is achieved through conservative selection of electronic parts.

Designed to be compatible with vehicles such as Ariane, which commonly launch multiple payloads, the StarBus design offers frequent, cost-effective launch-sharing opportunities.

Customers can purchase the StarBus spacecraft bus alone, or as part of a turn-key service that includes an integrated payload, operations and data delivery as well.

Designed and developed as a standard bus for commercial telecommunications and direct broadcast missions, StarBus fills a market niche for small, high power geosynchronous communications spacecraft. Orbital's first application of the StarBus design, IndoStar 1, was successfully launched in November 1997 along with another satellite on an Ariane rocket.