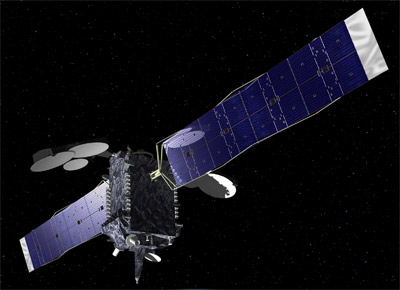 Orbital Sciences Corporation announced today that it has signed a contract with London-based Avanti Communications Group plc for a new geosynchronous (GEO) communications satellite. The spacecraft, to be named HYLAS 2, will be based on Orbitals Star-2.4 satellite platform. The satellite is scheduled for delivery in early 2012. When the HYLAS 2 satellite is placed into commercial service following its launch and in-orbit testing, Avanti will more than triple the satellite capacity that it will offer with its first Ka-band satellite, HYLAS 1, which is scheduled to be launched in the first half of 2010. Specific financial terms of the contract were not disclosed; however the Export-Import Bank of the United States will provide funding for the project.

The HYLAS 2 satellite will carry 24 active Ka-band user beams and four gateway beams, and will produce approximately 5.0 kilowatts of payload electrical power. The Ka-band spot beams will provide two-way communications services to facilitate high-speed delivery of data to end-user applications such as corporate networking, broadband Internet access, business continuity services and video distribution. Using the HYLAS 2 spacecraft, Avanti will provide its data and video services to Northern and Southern Africa, Eastern Europe and the Middle East. In addition, the spacecraft will be equipped with a steerable spot beam, also operating at Ka-band, which can provide coverage anywhere on Earth that is visible to the satellite.