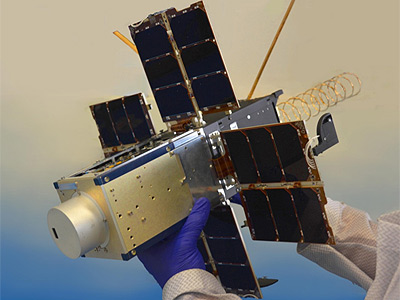 The satellites consist of a LANL built Prometheus Block-2 1.5U CubeSat featuring the attached 1.5U NACHOS experiment module. Power and communications are handled via the Prometheus bus.

NACHOS is a technology demonstration of an ultra-compact, high-resolution, hyperspectral imager that is able to monitor fossil fuel burning and low-level passive degassing at volcanoes. If successful, it will be a paradigm shift in space-borne sensingfrom expensive single-platform, large-satellite instruments, to agile constellations of relatively inexpensive instruments on small satellites.

The satellites have a unusual high mass for a 3U Cubesat due to 2 kg ballast to increase the orbital life time.

NACHOS 1 was launched in February 2022 on the Cygnus CRS-17 cargo craft. It will be deployed from Cygnus after departing the ISS.

The qualification model will be launched under the DoD Space Test Program on a NACHOS 2 on a LauncherOne in 2022.