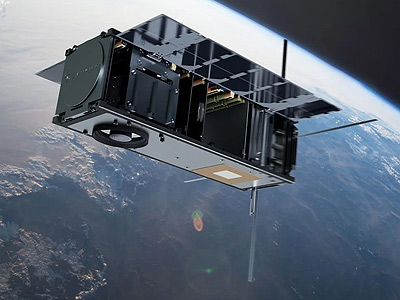 AMAN is Omans first orbital mission. It is a single earth observation satellite meant to demonstrate the future feasibility of a larger constellation.

AMAN is a 3U CubeSat and was developed after a memorandum of understanding among the Sultanate of Oman, Polish Small Satellite manufacturer and operator SatRev, Poland-originated AI data analytics specialists TUATARA, and Omani-based merging technology innovator ETCO. The agreement includes additional planned small satellites, including this, the first in Omans history.

AMAN uses a 3U CubeSat platform with advanced Earth-Observation capabilities and based on the STORK satellites.

AMAN is outfitted with the Vision-300 optical payload, which has been tested in space and is designed for nano- and micro-satellite applications. Vision-300 is suited for medium ground sampling distance imaging applications such as precision agriculture, forestry, and land use, as well as energy, infrastructure, and coastal monitoring. The ground resolution is 5.8 km.

The satellite was launched on 9 January 2023 from Spaceport Cornwall by Virgin Orbit with their LauncherOne rocket but the launch was a failure and the satellite did not achieve orbit.