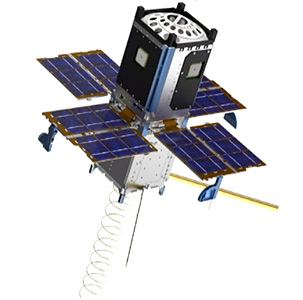 The satellites consist of a LANL built Prometheus Block-2 1.5U CubeSat featuring the attached 1.5U Gunsmoke-J experiment module. Power and communications are handled via the Prometheus bus. Gunsmoke-J uses emerging advanced electronics to allow the use of dedicated intelligence assets to provide tactically actionable targeting data to warfighters on a responsive and persistent timeline.

Three flight units have been built.

Launch of one is planned for March 2021 on a shared Electron Photon-LEO launch.

Another one was launched in February 2021 on the Cygnus CRS-15 cargo craft. It will be deployed from Cygnus after departing the ISS.