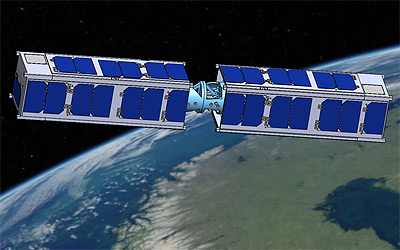 The PAN (Pathfinder for Autonomous Navigation) is a technology demonstration to launch two 3U CubeSats that will autonomously rendezvous and dock in low-Earth orbit.

The Pathfinder for Autonomous Navigation (PAN) project aims to launch two 3U+ CubeSats which will autonomously rendezvous and dock in Low Earth Orbit. This is the first CubeSat mission to ever attempt docking and will represent one of the most advanced autonomous CubeSat systems that has flown to date. Demonstrating autonomous rendezvous and docking capabilities on the CubeSat scale opens the door to new spaceflight capabilities such as the on-orbit assembly of advanced structures like space stations.

PAN started as a collaboration between NASAs Langley Research Center in Hampton, Virginia, and Cornell University. The team delivered two satellite prototypes to Langley in October 2016 for a ground demonstration to complete this phase of the project, and now the team plans to deliver two flight-ready satellites in early 2019 for launch shortly after.

PAN is planned to be launched 2019 on a LauncherOne rocket on the STP-27VP mission.