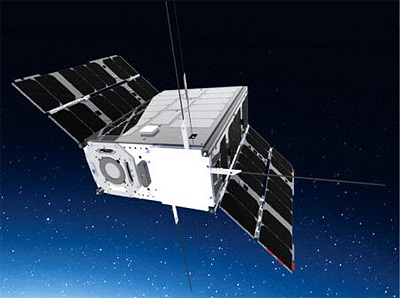 IOD-AMBER or IOD 3 is a British 6U-CubeSat carrying an experimental payload for Horizon Technologies.

Horizon Technologies, and the Satellite Applications Catapult have signed a contract to adapt Horizon Technologies existing FlyingFish signals intelligence (SIGINT) system for a 6U CubeSat platform as part of the Catapults In-Orbit Demonstration programme.

The AMBER is a Space-Based Maritime Domain Awareness (MDA) Data-as-a-Service (DaaS), which will serve as a prototype for a constellation of CubeSats.

The AMBER payload will be able to locate and track vessels worldwide by picking up their RF emissions using the L-Band Sat Phone detection sensor package derived from Horizon Technologies existing FlyingFish system, combined with X and S-Band sensors and an AIS receiver to detect, geolocate, and correlate these signals against the presence of AIS beacons.

The Satellite Applications Catapult, which was set up by the government to foster New Space enterprises, is providing six satellites on which companies can prove their technologies work on orbit. Five of these satellites will be manufactured by Clyde Space.