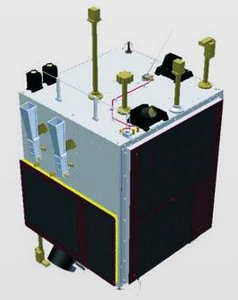 SaudiSat 4 features a joint NASA Ames and KACST experiment for the control of charge build-up on free-floating test masses critical to the operation of gravitational reference sensors (GRS) on drag-free spacecraft. Essentially, the GRS is an extremely accurate accelerometer that allows its host spacecraft to fly in an orbit defined solely by gravity, and not be affected by solar pressure and atmospheric drag. Its performance is limited in part by the charge build-up on its free-floating test mass.

The UV-LED system removes this charge by shining UV light on the test mass, creating a cloud of electrons through photoemission. The discharge rate is controlled with electrodes. Stanford University demonstrated this technology in the laboratory environment and NASA/ARC implemented the technology in a flight package that was flown on the KACST spacecraft Saudisat 4.