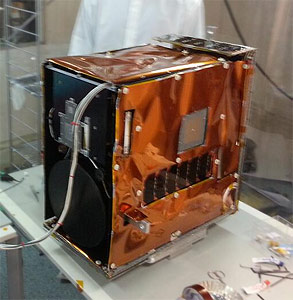 BugSat 1 is a technology demonstration mission for the Aleph-1 (ÑuSat) constellation of small earth observation satellites designed by the Argentinean company Satellogic S.A.

BugSat 1 is a 22 kg microsat with outer dimensions of 275 × 500 × 500 mm overall. The mission tests a number of custom designed components: three antennas, a mid-resolution camera system, a GPS receiver, a UHF radio based on COTS components and a C-Band radio based in COTS components designed for IEEE 802.11a ground operation.

The satellite periodically and autonomously transmitts AX.25 packets for the Amateur radio community to receive in the UHF band, and after the first part of the technology demonstration part of the mission is over, the satellite enters a mode that includes a Digipeater and science data downloads from the payload for the amateur radio community to use.

BugSat-1 was launched in multi satellite launch on a Dnepr rocket in June 2014 from Yasny (Dombarovsky) cosmodrome.