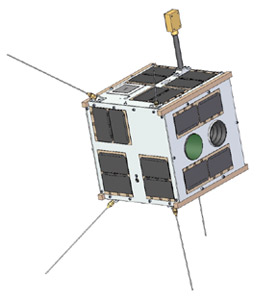 CanX-3 (Canadian Advanced Nanospace eXperiments), also known as BRITE (BRIght-star Target Explorer), is a mission planned to make photometric observations of some of the brightest starts in the sky in order to examine these stars for variability. The observations have a precision at least 10 times better than achievable using ground-based observations, and it is packaged inside a CanX-class nanosatellite.

The design is a 20 cm cube, chosen to accommodate the main telescope. It leverages a number of technologies qualified on CanX-2 and incorporates SFL's high-performance attitude control system, using reaction wheels developed in collaboration with Sinclair Interplanetary.

The two canadian satellites are copies of the Austrian BRITE satellites UniBRITE (CanX 3A) and TUGsat 1 (BRITE-Austria). One has an instrument sensitive to a blue (BRITE-Montreal) and the other with a camera optimized for a red wavelength range (BRITE-Toronto).