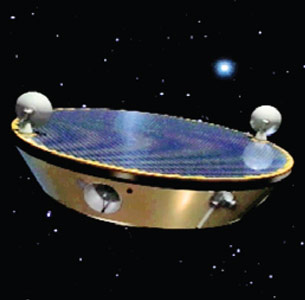 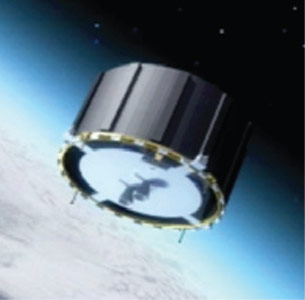 LISA (Laser Interferometry Satellite Antenna) is an ESA mission involving three spacecraft flying approximately 5 million kilometers apart in an equilateral triangle formation. Together, they act as a Michelson interferometer to measure the distortion of space caused by passing gravitational waves. Lasers in each spacecraft will be used to measure minute changes in the separation distances of free-floating masses within each spacecraft.

LISA is essentially a giant Michelson interferometer placed in space, with a third arm added to provide independent information on the two gravitational-wave polarisations and for redundancy. The distance between the spacecraft - the interferometer arm length - determines the frequency range in which LISA can make observations; it has been carefully chosen to allow observation of most of the interesting sources of gravitational radiation, namely massive black holes and galactic binaries.

Each of the three LISA spacecraft will carry two telescopes with associated lasers and optical systems. Pointing in directions separated by 60 degrees, the telescopes will communicate with the spacecraft at the other two corners of the equal-sided triangle. Apart from headaches about aiming the laser beams from one small spacecraft to another across 5 million kilometers of space, the team has to deal with other forces besides gravitational waves which will alter the separation of the spacecraft - the pressure of sunlight, for example.

The spacecraft must sense the extraneous forces and counteract them with electric thrusters operating with amazing delicacy. Central to each optical system, will be a magic cube 4 centimeters wide, made of gold-platinum alloy. This 'proof mass' will float freely in the weightless condition of space. Acting as a reflector for the laser beams, the magic cube will provide the benchmark for the inter-spacecraft distance measurements.

Each LISA spacecraft carries a propulsion module for the transit to the final orbit. This module will be jettisoned before mission operations will begin.

The new technology needed for LISA will be tested in the precursor mission LISA Pathfinder (formerly SMART-2), which will be an ESA Technology Demonstrator Mission carrying the LISA Test Package, to be launched in 2012.

NASA, who was originally a partner in the project cancelled their funding for LISA in April 2011.

ESA selected LISA in June 2017 as the third large-class mission in ESAs Science program. Launch is expected in 2034.