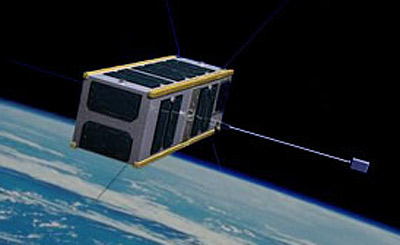 ANTELSAT is a 2U CubeSat class satellite, which has been developed by the Uruguayan Facultad de Ingeniería de la Universidad de la República (FING), the State Faculty of Engineering, and the national telecom service provider ANTEL. It is the first Uruguayan satellite

The purpose of ANTELSAT is to build and operate the first satellite ever launched into orbit by Uruguay and to develop skills in radio and aerospace engineering, to promote enthusiasm in STEM education at all levels, and provide challenging activities for undergraduate students. The spacecraft is planned to transmit colour and infrared images of the surface of the earth, and to provide several services to radio amateurs. The mission is purely experimental and a technology demonstrator of all the satellite subsystems, which have been custom designed locally.

ANTELSAT features attitude determination via magnetometer and photodetectors and uses an active 3-axis control system via magnetorquers. Power is supplied by solar cells mounted on all sides of the satellite except for the nadir pointing side. The imaging payload consists of near-Infra-red and visible spectrum cameras.

ANTELSAT was deployed from the Italian UniSat 6, which in turn was launched aboard a Dnepr launch vehicle operated by Kosmotras.