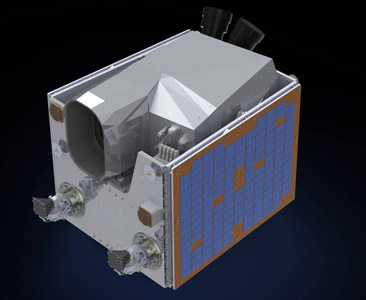 The SSTL KazEOSat 2 satellite, formerly known as MRES (Medium Resolution Earth Observation Satellite), delivers wide swath multispectral imagery of the Kazakh territory and other parts of the Earth. It weighs 177 kg and have the capability to image and downlink one million square kilometers per day, with exceptionally agile off-pointing capabilities for this class of satellite.

SSTL delivered the KazEOSat 2 satellite within a 3 year timeframe which includes a comprehensive training and development element. Kazakhstan's KazEOSat system also incorporates advanced new technologies that have been developed for the NigeriaSat-2 satellite that include enhanced data handling and downlink capabilities. SSTL produced an enhanced version of its SSTL-150 satellite platform for a satellite with a launch weight of less than 200 kg, a ground resolution of 6.5 meters and a swath width of 77 km. The satellite is capable of swiveling its optical imager up to 38 degrees off nadir. It was placed into a 630 km sun-synchronous orbit.