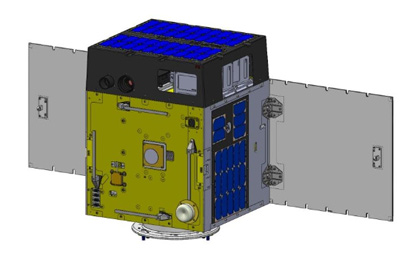 Hodoyoshi 3 is an experimental earth-observing micro-satellite built by the University of Tokyo. It has a 40 m ground resolution.

The satellite is built on a 3-axis stabilized earth-pointing bus, which generates up to 100 W electrical power. It features an H2O2 propulsion system. The main payload is a medium resolution imaging system with a ground resolution of 40 m and 200 m.

Additionally it carries a store and forward communications payload and hosted experiments.

Also a promotional payload is on board, consisting of a 4-cm "Hello Kitty" figurine with a camera to take images of Kitty with the Earth visible in the background through a small window.

Hodoyoshi 3 was launched piggy-back with a large number of other small satellites, among them Hodoyoshi 4, on a Dnepr rocket from the Yasni (Dombarovsky) cosmodrome in mid 2014.