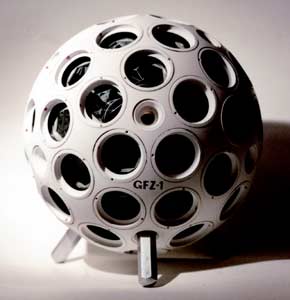 GFZ 1 (Geo Forschungs Zentrum Potsdam 1) is the first satellite mission designed and funded by the GeoForschungsZentrum Potsdam, Germany. The mission objectives of GFZ-1 are to determine variations in the rotational characteristics of the earth and to measurement changes in the earth's gravity field.

For the high resolution determination of the parameters of the gravity field the satellite must be launched into the lowest possible orbit. At its altitude of 400 kilometers, GFZ-1 will be the lowest geodynamic satellite to be ranged to by lasers and it is anticipated that it will lead to a significant improvement in the modeling of the gravity field. As the vehicle's orbit decays, the satellite's orbital motion will also be used calculate atmospheric densities.

GFZ-1 is a passive geodetic satellite which only has one instrument, the retroreflector array. The GFZ-1 RRA consists of 60 corner cubes and has a center of mass correction of 58 millimeters + 2 millimeters. These retroreflectors are quartz prisms placed in special holders that are recessed into the satellite's body. External metallic surfaces are covered with white paint for thermal control purposes and to facilitate visual observation in space.

The satellite was built and launched by Russia. GFZ-1 was transported to the Mir Station aboard the Russian Progress-M 27 spacecraft and from there put into a low earth orbit in April 1995.

On June 23rd, 1999, 01:00 UT GFZ-1 completed its mission. The satellite burned up in the upper atmosphere. Since its spectacular start GFZ-1 has orbited nearly 24,000 times around the Earth. During four years and 64 days in space, 5,402 passes of GFZ-1 were observed by 33 stations of the global SLR network.