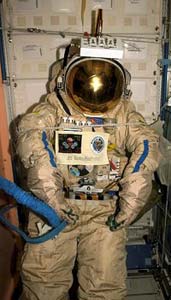 RadioSkaf (also known as SuitSat) was a retired Russian Orlan-M spacesuit with a radio transmitter mounted on its helmet. The Orlan-M 14 spacesuit was launched with the Pirs Module into orbit. When its useful live was over, a communication module was delivered with Progress M-54, which was then mounted on the retired spacesuit.

SuitSat-1 was deployed in an ephemeral orbit around the Earth on 3 February 2006. The idea for this novel satellite was first formally discussed at an AMSAT symposium in October 2004, although the ARISS-Russia team is credited with coming up with the idea as a commemorative gesture for the 175th anniversary of the Moscow State Technical University.

After deployment it was reported, that RadioSkaf fell silent, but shortly after was discoverered to be transmitting but much more weakly than expected. Designated by AMSAT as AO-54, SuitSat-1 remained in operation for more than two weeks, easily outlasting initial predictions that it would transmit for about a week. SuitSat-1 re-entered and burned up in Earth's atmosphere in September 2006.

Plans to launch RadioSkaf 2 (also known as SuitSat 2) in 2010 have been shelved, when the payload had been redesigned to fly without a Orlan-spacesuit, as due to storage considerations, the two surplus Orlan space suits in storage on the ISS were discarded via the Progress Cargo Vessel earlier. This version is now called RadioSkaf 2 (ARISSat 1).