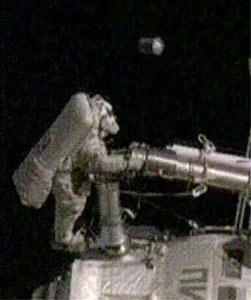 The TNS-0 (Technologicesky Nanosputnik), also called TEKh-42, is a small Russian experimental satellite, which was deployed from the ISS on 28 March 2005 during a spacewalk. It was delivered to the space station by Progress-M 52.

TNS 0 will serve as the prototype for future super-small craft. Specialists from the Moscow Russian Scientific Research Institute developed the TNS-0 for Space Instrument Engineering (RNII-KP). The TNS-0 weighs 4.5 kilograms. It is designed to check up the data transmission line operated by the GlobalStar satellite communications system. The satellite consists of a lithium battery, two modems, an antenna and an on-board timer. It proved too costly to launch the TNS-0 via a carrier rocket, since a separate jettisoning system would have been required. RNII KP specialists agreed that it would be launched from aboard the space station.

TNS 0 is about a foot long, weighs 5 kg and contains a transmitter. The crew activated it before leaving the airlock and stowed it on the outside of the docking compartment. The object of the experiment is to develop small satellite control techniques, monitor satellite operations and develop new attitude system sensors.

Sharipov deployed it from the ladder at Pirs, giving it a push in the direction opposite the direction the Station is traveling, while Chiao took photos. It left the Station at a relative velocity of about one meter per second.