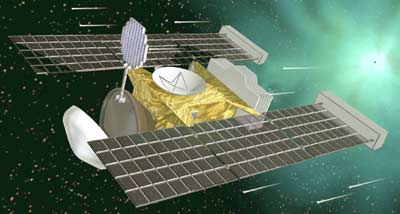 Stardust is the first U.S. space mission dedicated solely to the exploration of a comet, and the first robotic mission designed to return extraterrestrial material from outside the orbit of the Moon.

The Stardust spacecraft was launched on February 7, 1999, from Cape Canaveral Air Station, Florida, aboard a Delta II rocket. The primary goal of Stardust is to collect dust and carbon-based samples during its closest encounter with Comet 81P/Wild 2 is a rendezvous scheduled to take place in January 2004, after nearly four years of space travel.

Additionally, the Stardust spacecraft will bring back samples of interstellar dust, including recently discovered dust streaming into our Solar System from the direction of Sagittarius. These materials are believed to consist of ancient pre-solar interstellar grains and nebular that include remnants from the formation of the Solar System. Analysis of such fascinating celestial specks is expected to yield important insights into the evolution of the Sun its planets and possibly even the origin of life itself.

In order to meet up with comet 81P/Wild 2, the spacecraft will make three loops around the Sun. On the second loop, its trajectory will intersect the comet. During the meeting, Stardust will perform a variety of tasks including reporting counts of comet particles encountered by the spacecraft with the Dust Flux Monitor, and real-time analyses of the compositions of these particles and volatiles taken by the Comet and Interstellar Dust Analyzer (CIDA). Using a substance called aerogel, Stardust will capture these samples and store them for safe keep on its long journey back to Earth. This silica-based, material has been inserted within the Aerogel Collector Grid, which is similar to a large tennis racket. Not until January 2006, will Stardust and its precise cargo return by parachuting a reentry capsule weighing approximately 125 pounds to the Earth's surface.

Stardust is the fourth NASA Discovery mission to be chosen and follows on the heels of Mars Pathfinder, the Near Earth Asteroid Rendezvous (NEAR) mission, and the Lunar Prospector mission. The Discovery Program, is an ongoing program that is intended to offer the scientific community opportunities to accomplish frequent, high quality scientificinvestigations using innovative and efficient management approaches. It seeks to keep performance high and expenses low by using new technologies and strict cost caps.

On 15. January 2006 the capsule containing the samples reentered and landed succesfully on the Dugway Proving Ground at the Utah Test and Training Range (UTTR). The spacecraft itself remains in a solar orbit for potential further use.

In July 2007 the extend mission called NExT (New Exploration of Tempel 1) was approved. The mission will reuse NASA's Stardust spacecraft to revisit comet 9P/Tempel 1. This investigation will provide the first look at the changes to a comet nucleus produced after its close approach to the sun. It will mark the first time a comet has ever been revisited. NExT also will extend the mapping of 9P/Tempel 1 making it the most mapped comet nucleus to date. This mapping will help address the major questions of comet nucleus "geology" raised by images of areas where it appears material might have flowed like a liquid or powder. The images were returned by Deep Impact from its encounter with the comet on July 4, 2005. NExT successfully flew by 9P/Tempel 1 on Feb. 14, 2011. On March 24 2011 Stardust performed a burn to deplete the remaining fuel and was finally switched off.