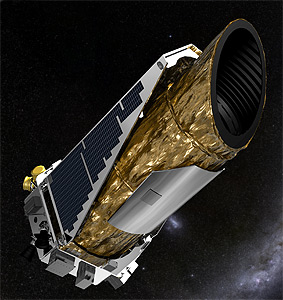 The scientific goal of the Kepler Mission is to explore the structure and diversity of planetary systems. This is achieved by surveying a large sample of stars to:

Transits by terrestrial planets produce a fractional change in stellar brightness of 5 × 10-5 to 40 × 10-5 lasting for 2 to 16 hours. The orbit and size of the planets can be calculated from the period and depth of the transit.

The Kepler instrument is a 0.95-meter aperture differential photometer with a 105 deg2 field of view. It continuously and simultaneously monitors brightnesses of 100,000 A-K dwarf (main-sequence) stars brighter than 14th magnitude. The experiment is not biased by preselection of stellar type or single versus multiple star system.

The Kepler photometer is a simple single purpose instrument. It is basically a Schmidt telescope design with a 0.95 meter aperture and a 105°2 (about 12° diameter) field-of-view (FOV). It is pointed at and records data from just a single group of stars for the four year duration of the mission.
The photometer is composed of just one "instrument," which is, an array of 42 CCDs (charge coupled devices). Each 50 × 25 mm CCD has 2200 × 1024 pixels. The CCDs are read out every three seconds to prevent saturation. Only the information from the CCD pixels where there are stars brighter than mv=14 is recorded. (The CCDs are not used to take pictures. The images are intentionally defocused to 10 arc seconds to improve the photometric precision.) The data are integrated for 15 minutes.

Kepler was successfully launched in February 2009. In May 2013 the second of Kepler's four reaction wheels failed, which led to a temporary shutdown. During its mission, it registered more than 2,700 planet candidates, of which more than 130 could already be confirmed. In May 2014, an extended mission with Kepler operating on only two reaction wheels was approved. Instead of staring at the same field of stars, Kepler will pivot to point at different regions in the sky over the next two years.

Kepler's mission ended in late November 2018 after the spacecraft ran out of fuel.