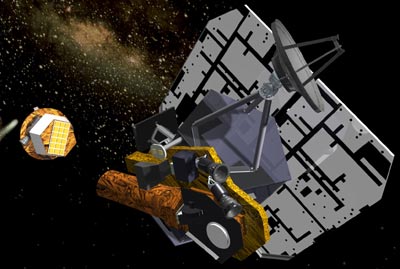 The objectives of the Deep Impact mission are to rendezvous with comet P/Tempel 1 and launch a projectile into the comet nucleus. Observations will then be made of the ejecta, much of which will represent pristine material from the interior of the comet, the crater formation process, the resulting crater, and any outgassing from the nucleus, particularly the newly exposed surface. This project was selected as a Discovery class mission in July, 1999.

The spacecraft consists of a 350 kg copper impactor attached to a flyby bus with a combined launch mass of 1020 kg. The spacecraft is a box-shaped honeycombed aluminum framework with a flat rectangular Whipple debris shield mounted on one side to protect components during comet close approach. Mounted on the framework are one high- and one medium-resolution instrument, each of which consists of an imaging camera and an infrared spectrometer which will be used to observe this ejected ice and dust, much of which will be exposed to space for the first time in over 4 billion years. The medium resolution camera has a field of view (FOV) of 0.587 degrees and a resolution of 7 m/pixel at 700 km distance and is used for navigation and context images. The high resolution camera has a FOV of 0.118 degrees and a resolution of 1.4 m/pixel at 700 km. The infrared spectrometers cover the range from 1.05 to 4.8 micrometers with FOV of 0.29 degrees (hi-res) and 1.45 degrees (lo-res). The total flyby bus instrument payload has a mass of 90 kg.

The flyby spacecraft measures approximately 3.2 m x 1.7 m x 2.3 m, is three-axis stabilized and uses a hydrazine propulsion system. Communications with the ground from the flyby bus are via X-band (8.000 MHz) through a 1 meter diameter parabolic dish antenna mounted on a 2-axis gimbal and via S-band between the impactor and flyby spacecraft. The maximum data rate will be 400 kbps. Power of 620 W at the encounter is provided by a 7.5 square meter solar array and stored in a small NiH2 battery.

The projectile is made of copper so it is easily identifiable in the spectra after the projectile is largely vaporized and mixed in with the comet ejecta on impact. The impactor is equipped with an Impactor Targeting Sensor, an imager which provides knowledge for autonomous control and targeting, and a cold-gas attitude control system. The total budget for the mission is $240 million.

Deep Impact was launched on 12 January 2005 on a Delta-7925. After entering a heliocentric orbit the spacecraft flew by Moon in January 2005. During this flyby the Moon was used to test the targeting system performance without releasing the impactor. The spacecraft was about 880,000 km from comet P/Tempel 1 on 3 July 2005 moving at a velocity of 10.2 km/s relative to the comet. The projectile was released at this point and shortly after release the flyby spacecraft executed a maneuver to slow down relative to the impactor at 120 m/s. On 4 July the impactor struck the sunlit side of the comet nucleus 24 hours after release. At the 10.2 km/s velocity, the impactor formed a crater roughly 25 meters deep and 100 meters wide, ejecting material from the interior of the nucleus into space and vaporizing the impactor and much of the ejecta. The flyby spacecraft was approximately 10,000 km away at the time of impact and began imaging 60 seconds before impact. At 600 seconds after impact the spacecraft was about 4000 km from the nucleus and observations of the crater began and continued until closest approach to the nucleus at a distance of about 500 km. At 961 seconds after impact imaging ended when the spacecraft reorients to cross the inner coma. At 1270 seconds the crossing of the inner coma was complete and the spacecraft oriented itself to look back at the comet. At 3000 seconds the spacecraft began playback of data to Earth. The comet and spacecraft were about 0.89 AU from Earth and 1.5 AU from the Sun during the encounter. Real time return of selected impactor images and flyby images and spectra were returned to Earth during the encounter. Primary data return was to be over the first day after encounter, with a 28 day supplemental data return period. Earth-based observatories also studied the impact. The spacecraft ranged over a distance of 0.93 to 1.56 AU from the Sun during the mission.

End of primary mission was in August 2005 and the spacecraft was put on a trajectory to an earth flyby and a possible flyby with a comet is considered. Deep Space was put in safe mode and waits for a possible reactivation.

The mission ended after flybys of two comets and 4.7 billion miles of interplanetary travel following a software glitch which likely put the space probe into a tumble in early August 2013. NASA was not able to reestablish communications with the spacecraft.