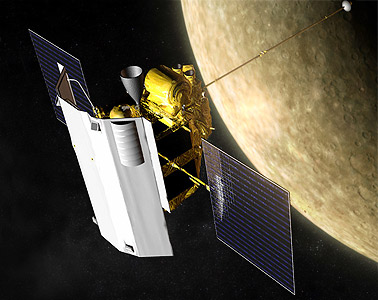 The MESSENGER (Mercury Surface, Space Environment, Geochemistry and Ranging) mission is designed to study the characteristics and environment of Mercury from orbit. Specifically, the scientific objectives of the mission are to study the surface composition, geologic history, core and mantle, magnetic field, and tenuous atmosphere of Mercury, and to search for water ice and other frozen volatiles at the poles over a nominal orbital mission of one Earth year.

The launch windows for MESSENGER are 23 March 2004 to 9 April 2004 and 2-16 August 2004. Launch will take place on a Delta-7925H  There will be an Earth flyby on 2 August 2005 at an altitude of 5536 km above the surface followed by two Venus flybys, on 25 October 2006 at an altitude of 3544 km and 6 June 2007 at 300 km. Three Mercury flybys, each followed about two months later by a course correction maneuver, put MESSENGER in position to enter Mercury orbit in March 2011. During the flybys – set for January 2008, October 2008 and September 2009 – MESSENGER will map nearly the entire planet in color, image most of the areas unseen by Mariner 10, and measure the composition of the surface, atmosphere and magnetosphere. Four deep space maneuvers are also planned. Data collected during the Mercury flybys will be used to help plan the scientific campaign during the orbital phase. Mercury orbit insertion will take place on 18 March 2011. The nominal orbit is planned to have a periapsis of 200 km at 60 degrees N latitude, an apoapsis of 15,193 km, a period of 12 hours and an inclination of 80 degrees. Data will be collected from orbit for one Earth year.

The MESSENGER spacecraft is a squat cylinder with a semi-cylindrical thermal shade for protection from the Sun and two dual-sided solar panel wings extending radially. A 3.6 m magnetometer boom also extends from the craft. Communications are through fixed phased-array antennas. Passive thermal control is utilized to maintain operating temperatures near the Sun. Five science instruments are mounted externally on the bottom deck of the main body:

The Energetic Particle and Plasma Spectrometer (EPPS) is mounted on the top deck and the magnetometer is at the end of the 3.6 m boom. Radio Science (RS) experiments will use the existing communications system.

MESSENGER ended its mission with the impact on Mercury's surface on 30 April 2015.