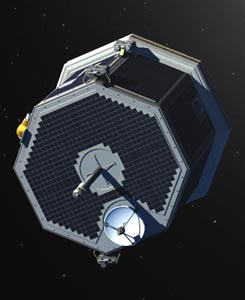 CONTOUR was launched by a Delta-7425 into a highly eccentric earth phasing orbit, where after 45 days the integrated Star-30BP kick motor was fired to propell the probe into its interplanetary trajectory. After the primary mission at Encke and Schwassmann-Wachmann-3, the probe could have been directed to an yet undiscovered comet.

On August 16. 2002 the kick motor was fired, but contact with the probe was lost. Images by Spacewatch showed three objects near the location of CONTOUR and a DSP early warning satellite observed a bright flare three seconds before the end of the burn, so one can assume, that the probe was destroyed due to a kick motor malfunction.

Currently APL studies the option of building a repeat CONTOUR 2 probe, which might be launched by a larger launch vehicle, thus eliminating the need to use a internal kick motor.