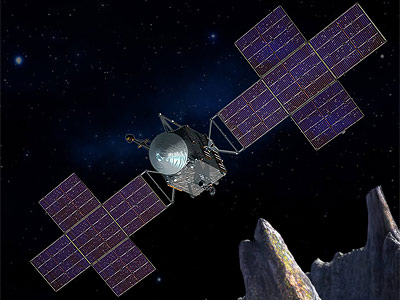 The Psyche mission will explore one of the most intriguing targets in the main asteroid belt  a giant metal asteroid, known as 16 Psyche, about three times farther away from the sun than is the Earth. This asteroid measures about 130 miles (210 kilometers) in diameter and, unlike most other asteroids that are rocky or icy bodies, is thought to be comprised mostly of metallic iron and nickel, similar to Earths core. Scientists wonder whether Psyche could be an exposed core of an early planet that could have been as large as Mars, but which lost its rocky outer layers due to a number of violent collisions billions of years ago.

Space Systems Loral (SSL) will build the spacecraft based on the SSL-1300 platform. The instrument set will be a multispectral imager, gamma ray and neutron spectrometer, magnetometer, and X-band gravity science investigation. It will feature also an additional experimental Laser communications system.

Psyche is targeted to launch in 2022, arriving at the asteroid in 2026, following a Mars flyby in 2023. Plans call for it to spend 20 months at the asteroid, performing science operations from four staging orbits, which become successively closer.

Psyche will be launched in 2022 on a Falcon-Heavy (Block 5)(px) together with the Janus missions.