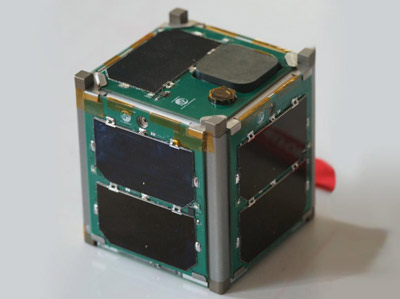 The Vermont Lunar Cubesat was a project to develop the prototype technologies for a triple CubeSat that will be self propelled (chemical rockets, or ion drive) from a geosynchronous piggy-back launch to the moon. The chemical rocket would have a lunar lander, and the ion drive spacecraft would go into lunar orbit. The project was done by Vermont Technical College. It was supported by Vermont Space Grant Consortium.

As a first step, a single unit CubeSat (1U) pathfinder in low earth orbit will test the navigation system and use NASAs GPS Enhanced Onboard Navigation System (GEONS) software, a space qualified GPS receiver and a star tracker camera (being built a Norwich University). It will have an onboard computer system, solar power supply and radio transceiver to communicate with the ground station at Vermont Tech.

The Vermont Lunar Cubesat was selected in 2010 under NASAs ELaNa program. It was launched as part of on an Air Force Minotaur-1 flight under the ELaNa-4 mission in September 2013 to a 500 km altitude, 40.5° inclination orbit. The satellite remained operating until it reentered on 21 November 2015.