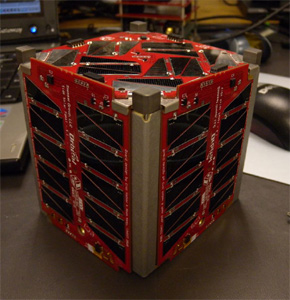 TJ3Sat is scheduled to be the first satellite to be flown and built by high school students. The satellite is a product of Thomas Jefferson High School for Science and Technologys Systems Engineering class. During this three year long endeavor approximately 30 high school students ranging from sophomores to seniors will have contributed. The project is broken down into individual subsystems that are assigned to groups of students. Each subsystem is assigned an industry representative that acts as a mentor to the students. In the end TJ3Sat will act as an educational resource for K-12 education worldwide.

As the satellite orbits the Earth it will beam back basic telemetry data (voltages, temperatures, CPU status,etc.) and host a voice synthesizer that will transmit uploaded text messages in a Steven Hawking-esk voice. The primary goal is to serve as a resource and educational outreach tool that will hopefully inspire other educational institutions to explore the wonders of Space.

The hardware components TJ3Sat have been made available through funding and donations from Orbital Sciences Corporation and Stensat LLC. Orbital has provided the basis for our satellite through the use of the CubeSat Kit from Pumpkin, Inc.

It was selected in 2011 by NASA's CubeSat Launch Initiative (CSLI) to be launched as part of the ELaNa program.

The launch on the ELaNa-4 mission was successful on 20 November 2013. After deployment, no signals were received from the satellite. It reentered on 16 September 2015.