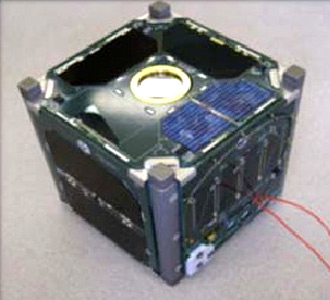 The NPS-SCAT (Naval Postgraduate School Solar Cell Array Tester) is a 1U CubeSat in development by the Space Systems Academic Group at NPS.

The objective of the NPS-SCAT CubeSat program is to provide a responsive platform to test solar cells in orbit while focusing on the education of NPS students. In addition, the knowledge gained from this CubeSat will be used to further develop the CubeSat program at NPS. The CubeSat development program educates NPS Space Systems military officer and civilian students in the full life cycle of space flight systems with the goal of providing a trained, educated, and experienced cadres of space professionals.

The NPS-SCAT CubeSat takes a single experiment from the NPSAT1 satellite, the Solar Cell Measurement System (SMS), as its payload. This experiment measures the characteristics of a solar cell to gain an understanding of how the experimental solar cells degrade over time due to interactions with the space environment. The supporting subsystems are fulfulled primarily by commercial-off-the-shelf (COTS) components, including the command and data handling subsystem, electrical power subsystem, and the primary communications subsystem.