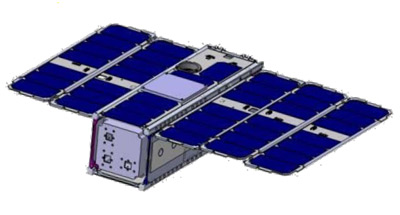 The SENSE (Space Environmental NanoSat Experiment) program is a rapid development effort of the USAF Space and Missiles Center Development Planning Directorate (SMC/XR) to demonstrate the capability of NanoSats to perform space missions in an affordable and resilient manner.

The three primary objectives for the SENSE mission are:

SENSE consists of two 3U CubeSats provided by Boeing unnder Colony-2 program, which were launched in November 2013. Both satellites are 3-axis stabilized with star cameras for attitude determination and are equipped with a Compact Total Electron Density Sensor (CTECS) to provide radio occultation measurements of total electron content and L-band scintillation.

SENSE 1 has a Cubesat Tiny Ionospheric Photometer (CTIP) monitoring 135.6 nm photons produced by the recombination of O+ ions and electrons.

SENSE 2 has a Wind Ion Neutral Composite Suite (WINCS) to acquire simultaneous co-located, in situ measurements of atmospheric and ionospheric density, composition, temperature and winds/drifts. Mission data will be used to improve current and future space weather models and demonstrate the utility of data from CubeSats for operational weather requirements.

The satellites were launched in on a rocket. Both satellites initially failed to deploy their solar arrays (one on SENSE 1 and both on SENSE 2) after launch and one suffered from power limitations and intermittent communication outages. The US Air Force reported in April 2015, that Boeing had performed numerous on-orbit anomaly resolution efforts since the launch and that activation of the flight software would be impossible without assistance of Boeing, whose contract for on-orbit SENSE support ended in December 2013.