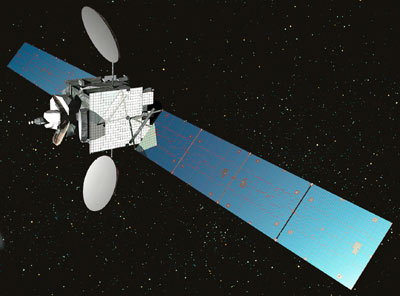 PAS-9 was one of three HS-601HP satellites ordered Oct. 12, 1998, from Hughes Space and Communications Company (HSC) by PanAmSat Corporation. The satellite will provide broadcast and general communications services in C- and Ku-band for the Americas, the Caribbean and western Europe, plus direct-to-home services for Mexico in Ku-band. PAS-9 will replace PAS-5 at 58° West longitude.

The satellite is a Hughes HS-601HP body-stabilized model, carrying 48 active transponders, 24 in C-band and 24 in Ku-band. The contract calls for 15 years of service. PanAmSat made its own arrangements for the launch vehicle.

All Boeing 601 spacecraft use the same basic bus design, allowing the company to realize efficiencies gained by production volume, tooling investments and quantity buys. The standard 601 model, with silicon solar panels, provides up to 4-5 kilowatts. The 601HP version uses gallium arsenide solar panels and other technological advances to provide as much as 10 kilowatts.

PAS-10 features such innovations as dual-junction gallium arsenide solar cells, built by Spectrolab, with the ability to convert nearly 22% of the sun's rays into electrical power; and XIPS, a xenon ion propulsion system built by Boeing Electron Dynamic Devices (formerly Hughes Electron Dynamics) that is 10 times more efficient than conventional bipropellant systems. With XIPS, a 90% reduction of propellant mass is possible, enabling the customer to opt for more payload, reduced launch costs, longer satellite life, or any combination of the above.

Intelsat changed the name of the PAS satellites to Intelsat effective to 1. February 2007.