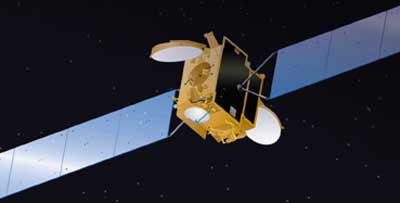 Aérospatiale built Xinnuo 1 (Sinosat 1) at its facilities in Cannes, with delivery in november 1997 of the satellite to the customer, the Chinese-German company Euraspace, acting on behalf of Sinosatcom, a Chinese company. This was the fifth satellite using the Spacebus-3000A platform.

It is a powerful three-axis satellite with a liftoff weight of 2,820 kg. Its solar array, spanning 26 meters, supplies over 5 kW to the payload of twenty-four C-band channels (36 MHz) and fourteen Ku-band channels (54 MHz). Three antennas, including two deployable antennas measuring 1.6 and 1.8 meters in diameter, and a 1 m in diameter fixed antenna, cover the targeted zone from an orbital position at 110.5&degree; East on the geostationary orbit, during a life span exceeding 15 years.

The CZ-3B launcher launched the satellite from the Xichang launch site in the People's Republic of China in July 1998. The satellite provides a range of telecommunications services (including television, telephony, and inter-banking data transmission) covering all China, the Indo-Chinese peninsula, Indonesia and the Philippines.

In 2010, the satellite was taken over by China Satcom and renamed ZX 5B (ChinaSat 5B). In 2012, it was sold to Pasifik Satelit Nusantara and used under the designation PSN 5 (PSN V).