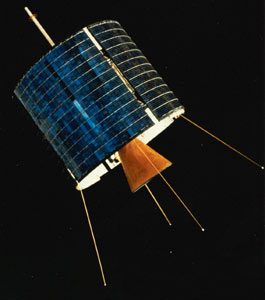 As the forerunner of a synchronous satellite system that would furnish communications to all the populated areas of the world, Early Bird, with capability of 240 circuits or one TV channel, successfully demonstrated the concept of synchronous satellites for commercial communications. While designed for an operational lifetime of only 18 months, the satellite was in continuous, full-time service for nearly 4 years. It was placed on reserve status in January 1969, but recalled into service in June of that year for use during the Apollo 11 mission. Two months later the satellite was again retired from active service and placed in orbital reserve by COMSAT. The satellite is currently inactive.

The primary advantage of a synchronous orbit communications satellite is that ground installations are greatly simplified. By virtue of the satellite's "fixed" position, complex and expensive tracking antennas are not required. However, in order to hold its position in relation to the Earth's axis, the satellite must be placed directly above the equator. Since Early Bird was launched from Cape Kennedy, which is north of the equator, certain maneuvers were necessary to properly position the satellite. These were performed by means of commands from the Earth station located at Andover, Maine. The launch vehicle for Early Bird was the Delta-D, a three-stage rocket built by Douglas Aircraft Company. Launched with its apogee motor in a forward position, Early Bird was aligned by the Delta's third stage at an angle of 16.7 degrees to the equator and spin stabilized. It was separated from the third stage at 26 minutes, 32 seconds after liftoff and coasted to its first apogee of 23,081 miles. During the elliptical orbits, Early Bird was precisely oriented by ground control.

With the firing of the apogee motor on the sixth apogee, Early Bird was thrust into an almost circular equatorial orbit near 32 degrees W longitude with an eastward drift rate of 1.5 degrees per day. Final synchronization to slow the drift rate and more nearly match the earth's rotation rate was accomplished on 14 April 1965. This maneuver placed Early Bird at its planned position, 28 degrees W longitude. The attitude of the satellite was then changed to concentrate the antenna beam on the Andover and European earth stations. The earth station at Andover was equipped with Hughes-developed telemetry and command equipment. Launching services and facilities were provided by NASA in accordance with an agreement with COMSAT.