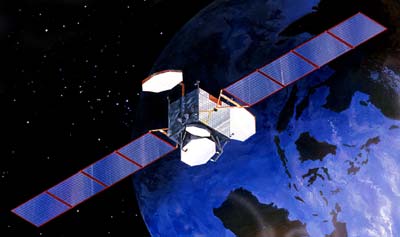 Foreseeing the growth of the communications business, Japan Satellite Systems, Inc., (JSAT) of Tokyo signed a contract in October 1993 for a Hughes HS-601 satellite from Hughes Space and Communications International, Inc. The satellite, JCSAT-3, was designed to relay voice, data, and television signals via Ku-band to eastern Asia, Australia, New Zealand, and India; and via C-band to eastern and southern Asia and Hawaii. In December 1995, JSAT returned to Hughes for another spacecraft, JCSAT-4, with similar coverage and increased power. In October 2000, HSCI became Boeing Satellite Systems International, Inc.

Like others in the Hughes HS-601 series, JCSAT-3 and 4 consist of a cube-shaped center payload section, with solar wings and an antenna array. The HS-601 is composed of two modules. The primary structure carries all launch vehicle loads and contains the propulsion system, bus electronics, and battery packs. The payload module holds communications equipment and isothermal heat pipes. Reflectors, antenna feeds, and solar arrays mount directly to the primary module, and antenna configurations can be placed on three faces of the bus. Such a modular approach allows work to proceed in parallel on both structures, thereby shortening the manufacturing schedule and test time. The satellites are built at Hughes Space and Communications Company facilities in El Segundo, Calif.

Both JCSAT-3 and 4 have a pair of four-panel sun-tracking solar array wings. Each wing extends 11.9 meters north and south from the body for an overall deployed length of 26.2 meters. These panels are designed to generate approximately 5,000 Watts with the wings deployed, using K-4 3/4 solar cells. Additionally, a single 30-cell, 200 Amp-hr, nickel-hydrogen battery provides power during eclipse periods.

Each satellite has four octagonal reflectors, one each on the east (for Ku-band) and west (for C-band) and two on the Earth-facing, or nadir, surface (for Ku-band). Each of these reflectors makes use of Hughes' patented shaped reflector technology, which eliminates the need for complex feedhorn arrays. With east and west reflectors deployed, the satellites measure 7.5 meters in width.

For launch, the solar wings and reflectors fold alongside the spacecraft bus, forming a box 2.8 meters by 4.9 meters by 3.8 meters. The booster places the spacecraft into a super-synchronous transfer orbit of about 167 km by 80,000 km. The super-synchronous orbit optimizes use of the satellite's own propellant during the transfer to geosynchronous orbit. After separation from the launch vehicle, the satellite's on-board 490-Newton (110 lbf) liquid apogee motor is fired to circularize the orbit at the 36,000 km geosynchronous altitude. The liquid bipropellant subsystem provides 12 thrusters of 22 Newtons (5 lbf) for stationkeeping. Once on-station, the satellites weigh approximately 1841 kg, including fuel required for 12 years of life. JCSAT-3 operates from 128 degrees East longitude. JCSAT-4 operates at 124 degrees East. After becoming operational, the JCSat 4 is refered by the designator JCSat R

In late 2009 Intelsat purchased the aging JCSAT R satellite to operate as a place holder under the designation Intelsat 26. It will be loaned to Turksat.