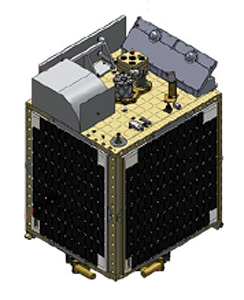 FalconSAT-6, is a microsatellite developed by the U.S. Air Force Academy and sponsored by the USAF Research Laboratory (AFRL).

The main experiment aboard FalconSAT-6 is a multi-mode flight experiment designed to prove the effectiveness of multiple thrust modes. Several other experiments will also be carried, and among these are experiments designed to prove and provide the most fuel-efficient changes in orbit which are available, and to test low energy ion head thrusters, testing the effectiveness of wireless versus wired telemetry, and measuring changes to the local ionospheric environment.

The primary payload is the AFRL Space Plasma Characterization Source, Mark II (SPCS-2), which is a reflight of the modified COTS Hall effect thruster (HET) payload flown on FalconSat-5. Since FalconSat-5 was unable to complete the experiment objectives due to electrical power system anomalies, FalconSat-6 will address many of the same SPCS objectives.

The USAFA-developed payloads are Cerberus, demonstrating a cuing architecture for space situational awareness (SSA), and the Harmonic Ionospheric Propagation Experiment (HIPE), which investigates the propagation of harmonically associated sinusoids through the ionosphere from a low power, on-board transmitter.

While, unfortunately, parts of the original payload (the Modular Array Technology for Reconfigurable Spacecraft, or MATRS) had to be removed due to spacecraft design constraints, a single experiment module (M5) and the flexible circuit experiment (FCE) are included on a bracket on the +Z payload deck. M5 is an advanced solar array experiment, while FCE will assess the utility of flexible circuits for future solar array development efforts. The experimental data (e.g. voltages, currents, temperatures, etc.) are collected by the VI Measurement Module (VIMM)