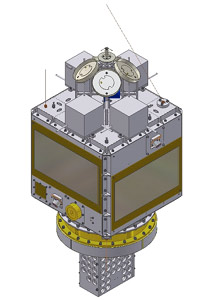 FalconSAT-3, is a 50 kg microsatellite being developed by faculty and cadets, and is the Air Force Academy's first attempt at achieving three axis attitude determination and control (ADCS). FalconSAT-3 will carry three payloads to conduct DoD research. The attitude requirements for FalconSAT-3 include pointing the satellite within +/- five degrees of ram direction, as well as attitude knowledge to within one degree. FalconSAT-3 will provide sophisticated characterization of plasma turbulence in the F region ionosphere. Significant advances in technology have enabled miniaturization of instruments that enable comprehensive measurements of both ambient and spacecraft-specific turbulence.

The three primary experiments include

The FalconSAT-3 satellite bus is custom fabricated at the United States Air Force Academy (USAFA) and is manifested for launch into a 35° inclination, 560 km circular orbit in late 2006. Satellite operations will be managed from the USAFA ground station. Complementary ground-based observations of the ionosphere will be taken both at USAFA and at remote locations at low magnetic latitudes, where equatorial ionospheric processes are particularly effective at stimulating plasma turbulence.