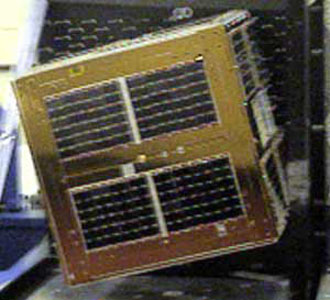 The first free-flying Academy satellite, FalconSat-1 carried the CHAWS (Charging Hazards and Wake Studies) experiment developed by the Physics Department at the Academy. The launch was successful and the satellite was deployed into its orbit without problems. However, the following weeks, cadets working in the Academy ground station struggled to bring the satellite totally on-line. Initial communication contacts with the satellite went well, but during subsequent it became apparent that the spacecraft's power system was not functioning correctly to properly charge the batteries during daylight. Unfortunately, after about 1 month, the mission was satellite the mission was terminated.

While FalconSAT-1 was a technical failure, it was a resounding academic success. Cadets participated in all phases of the mission from conceptual design though assembly, integration, testing, launch and on-orbit operations.