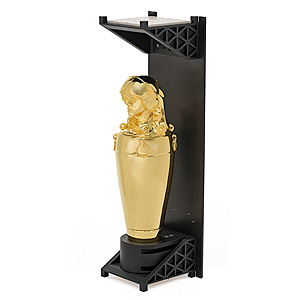 Enoch is a passive CubeSat built as an art project by conceptual artist Tavares Strachan under the auspices of the Los Angeles County Museum of Art (LACMA) in collaboration with SpaceX.

The satellite contains a 24-karat-gold canopic jar with a bust of the first African-American astronaut, Robert Henry Lawrence Jr.. Canopic jars were used by ancient Egyptians to house the organs of the deceased for use in the afterlife. This jar was blessed at a Shinto shrine in Japan and recognized as a container for Lawrences soul, according to the museum.

Pumpkin Space Systems created the sled structure for the canopic jar, which is compatible with a CubeSat deployer. It is fitted with three radar reflectors to aid tracking of the passive satellite.

ENOCH also flew the CUBIT (CubeSat Identification Tag) developed by SRI International, a small add-on to cubesats that transmits a signal identifying that satellite. The system, weighing only about 20 grams, is designed to operate independently from the rest of the cubesat, including its own battery. The CUBIT signals were detected and allowed the identification of the otherwise passive satellite.