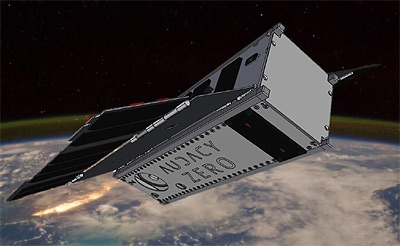 Audacy 0 is a 3U CubeSat built by Clyde Space as a pathfinder for the planned Audacy commercial data relay satellite constellation.

As a secondary payload the cubesat carries Stanford's Polar Orbiting INfrared Tracking Receiver (POINTR), an in flight demonstration of an optical receiver pointing, acquisition and tracking (PAT) system. The optical receiver payload would be pointed to the ground to acquire and track a beacon laser sent from a suitable ground facility, currently proposed as NASA JPLs OCTL facility.

The satellite was launched on Spaceflight Industry's SSO-A multi-satellite launch in 2018 on a Falcon-9 v1.2 (Block 5) rocket, but failed to esablish contact. In January 2020 Audacy shut down after failing to raise funding.