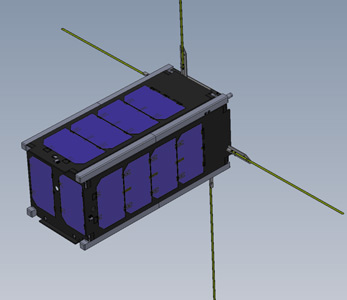 The CubeBug-1 2U CubeSat, also known as El Capitán Beto, is the first technology demonstration mission for a new cubesat platform design (mechanics, hardware and software) intended to be released as Open Source and Open Hardware for its use in Amateur projects, University projects and research labs. This project is sponsored by the Argentinian Ministry of Science, Technology and Productive Innovation, INVAP S.E., Satellogic S.A., and Radio Club Bariloche.

As payload on this first mission, some custom designed components for the BugSat earth observation satellites were tested: an ARM based on-board computer, a nano-reaction wheel with its driver circuit and a low resolution camera, all based on COTS components.

After the technology demonstration part of the mission is over, the satellite will enter a mode that will include services to the Amateur radio community, including a Digipeater and science data downloads from the payload.

The satellite was originally planned to be launched piggy-back on a Dnepr rocket, but was moved due to delays to a Chinese CZ-2D (2) launch in 2013.

A second satellite called CubeBug-1 or Manolito was launched in November 2013 on a Dnepr cluster launch. This one received after reaching orbit the additional designation LO 74 or LUSAT-OSCAR 74.