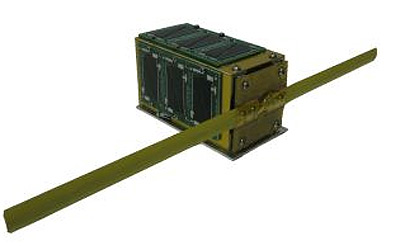 $50SAT is a PocketQube micro satellite made from commercial electronic components and designed to fit in a 50 mm cube. The concept for the satellite is to see if a micro radio transceiver, the HOPE RFM22, is sufficient for transmitting and receiving data from a satellite in orbit. The satellite transmited a callsign in 15WPM Morse, send some environmental data as 60WPM Morse as well as transmitting a data packets containing information about the satellites operation. The satellite listened for incoming data packets in order to provide a transmit on or off command functionality.

$50sat is comprised of two 40 mm × 40 mm circuit boards. The first is the processor/radio board which contains the PICaxe 40X2 processor programmed in PICaxe basic, the Hope RFM22B single chip radio and some peripheral devices. The PICaxe 40X2 is an easy to use micro controller popular in the education sector.

The second board is the power control and monitor board. This board contains four maximum power point controllers, one for each solar array on each side of the spacecraft as well as current monitors for the battery and summed solar power. The battery is a common 3.7 V lithium ion camera battery.

The satellite transmited data telemetry about the satellites operation, a sequence of call signs in slow FM Morse and some key data as fast FM Morse (120WPM). The main data payload was also be transmitted as FSK RTTY which should be readily heard on the ground with basic amateur radio equipment.

The satellite was deployed from the Italian UniSat 5 satellite from a MR-FOD (Morehead Roma Femtosat Orbital Deployer) deployer after launch on a Dnepr booster.

$50SAT received in orbit the designation MO 76 (Morehead-OSCAR 76). It operated for 20 months.