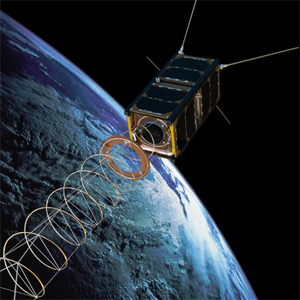 GOMSpace's GOMX-1, renamed after launch to GATOSS (Global Air Traffic Awareness and Optimizing through Spaceborne Surveillance), is a student built amateur radio 2U CubeSat. The mission is being flown under the auspices of a Government research grant covering space related radio research. The objective of the satellite is to qualify a number of subsystems and provide extensive in-flight data.

GOMX-1 features a payload capable of tracking from space trans-oceanic flights by reception of the Automatic Dependent Surveillance-Broadcast (ADS-B) signal emitted by the aircraft. The ADS-B signal is in use today for air traffic control in areas covered by terrestrial based receivers, but is currently not of use over the oceans due to its limited range. The GomX-1 satellite with its sensitive Software Defined Radio (SDR) payload will be the first demonstration that the ADS-B signals can be received from space and utilized to provide increased global situational awareness for key stakeholders in air traffic control.

The mission will also test the use of the open source Cubesat Space Protocol for a complete mission including the space link.

More than 15 students at Aalborg University have been actively involved in the development of this payload as part of their semester projects.