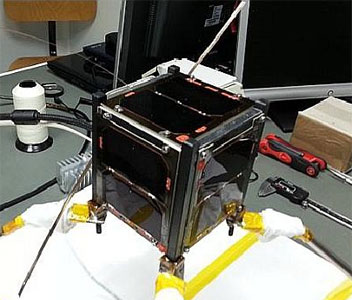 The HumSat project is an international educational initiative for building a constellation of nanosatellites providing worldwide communication capabilities to areas without infrastructure. The overall objective of the HumSat constellation is to provide messaging services through small user terminals on the basis of the store-and-forward concept. The project is open for international collaboration with organizations developing nanosatellites. The HumSat project is endorsed by the UN Program on Space Applications called BSTI (Basic Space Technology Initiative) which was started in 2009.

HumSat-D is a standard CubeSat of 10 cm side length and a mass of 1 kg designed and developed at the University of Vigo (UVigo), Spain. HumSat-D is the first (hence, a demonstrator) satellite of the future HumSat constellation.

HumSat-D spacecraft is based on the XaTcobeo cubesat and is built on Pumpkin's 1U CubeSat kit. It has no attitude control or propulsion.

The satellite will be deployed from the Italian UniSat 5 satellite after launch on a Dnepr booster.