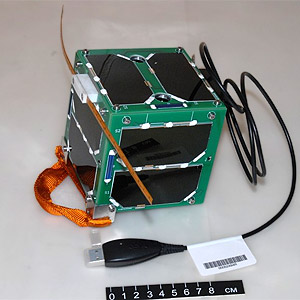 The 1 kg satellite is built to the 1U-CubeSat form factor, but due to its deployment mode by manual launch during a spacewalk lacking the typical guiderails. It is powered by fixed solar cells on each side to charge their batteries. The payload consists of each a camera operating in the visible and infra-red spectrum.

It was launched in February 2014 on board of the Progress-M 22M cargo craft to the ISS to be hand deployed during a spacewalk on 18 August 2014. Although the satellite was successfully deployed in orbit, no signals were received.