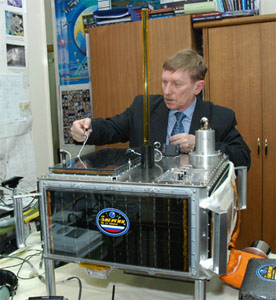 Originally planned to be based on an Orlan spacesuit like RadioSkaf (SuitSat 1), but was later reconfigured to be a boxlike structure to fly on its own, as due to storage considerations, the two surplus Orlan space suits in storage on the International Space Station (ISS) were discarded via the Progress Cargo Vessel earlier this year. The project team wass moving ahead, using the same hardware that was to fly in the Russian Orlan suit. Russia will continue to call the satellite RadioSkaf-2, so ARISS is designating it ARISSat-1/RadioSkaf-2.

The satellite was transported piggy back by the Progress-M 09M cargo spacecraft to the ISS and was hand launched during a space walk on 3. October 2011.