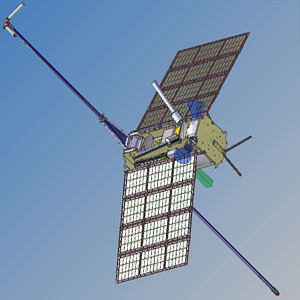 Chibis-M is a 40 kg microsatellite built by the Space Research Institute (IKI). The satellite conducted ionospheric research. It was launched piggy-back on the Progress-M 13M cargo craft and was deployed from the craft after the Progress left the ISS.

Chibis-M carried a plasma-wave experiment, which was aimed at the solution of a fundamental problem  a study of the interrelation of the plasma-wave processes connected with the manifestation in the ionosphere of solarmagnetosphereionosphereatmosphere connections and the parameters of space weather. The specific fundamental problem is the search for universal laws governing transformation and dissipation of plasma-wave energy in the magnetosphere-ionosphere system.

The solution of this problem was achieved employing the coordinated procedure:

After 2 years and months on orbit, Chibis-M reentered still operational on 16 October 2014.