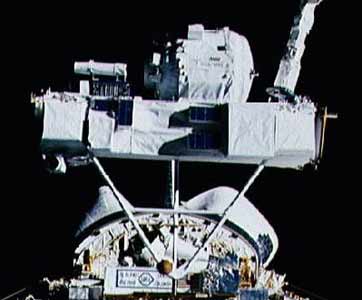 The IBSS experiment, sponsored by the Strategic Defense Initiative Organization, consists of an infrared radiation sensor, a multispectral sensor that measures light in several wavelengths, two low-light-level television cameras, and various support equipment. IBSS's instruments observed Discovery and measure the plumes created as Discovery fired its reaction control and orbital maneuvering system engines. By comparing the geometry and spectral characteristics of the plumes, as seen by IBSS, with the known firing directions, burn durations, and chemical composition of the exhaust gases, the experiment provided valuable data for the development of ballistic missile sensors.

Part of the IBSS experiment will involve chemical releases of xenon, neon, carbon dioxide, and nitrous oxide gases from canisters in the orbiter's payload bay. The IBSS examined the interaction of the gases, as they spew from the payload bay, with Earth's magnetic field force lines. Still another aspect of the experiment began with ejecting several chemical release observation subsatellites (CRO). Subsatellites are small satellites released from the Shuttle's payload bay as a part of the experiments the Shuttle is conducting. When the CRO subsatellites had drifted to distances of 50 to 200 kilometers from the SPAS/IBSS satellite, they were commanded to release their chemical loads of rocket propellants to vaporize in space. Simultaneous observations by the IBSS and ground-based sensors permitted researchers to characterize similar releases that occur when ballistic missiles make midcourse maneuvers.

On day three of the mission, Discovery maneuvered to within grasping distance of the SPAS/IBSS satellite. It was captured with the RMS and held above the bay so that the IBSS payload could be used for additional experiments.

At the end of the mission IBSS/SPAS was placed back into the payload bay and was returned to earth with the orbiter.