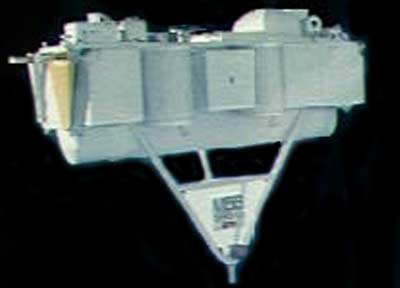 SPAS 01 (Shuttle Palette Satellite 01) was a German instrument package that was deployed and recovered by the STS-7 Shuttle mission. Ten experiments mounted on the Shuttle Pallet Satellite (SPAS-01) performed research in forming metal alloys in microgravity and use of remote sensing scanner. Orbiter's small control rockets fired while SPAS-01 was held by the remote manipulator system to test movement on the extended arm.

SPAS-01A flew for the second time in space on STS-41-B, but remained in the attached mode during this mission. The West German-built platform carried the same set of experiments that were aboard during STS-7. On flight day 7, the SPAS-01A was to be raised out of the payload bay by the Remote Manipulator System to a position overhead about 1.5 to 3 m from the forward payload bay bulkhead. In the attached mode, the SPAS-01A was to be rotated at 1 degree per second to duplicate the attitude and dynamics of the Solar Max satellite, which was to be repaired in ann upcoming mission. Two astronauts were to practice the maneuvers with a rotating satellite. SPAS 01A remained in the payload bay due to an electrical problem in the RMS.