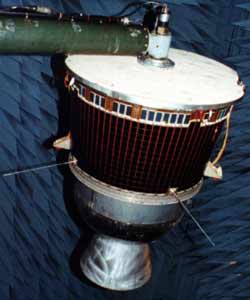 The Clementine Interstage Adapter Satellite (ISAS) was the lunar transfer booster used to propel the Clementine spacecraft to the Moon from Earth orbit. After boosting Clementine into a lunar transfer orbit, the ISAS was left in a highly elliptical (~300 × 127,000) Earth orbit with an inclination of 67 degrees. From this orbit the ISAS passed regularly through the Van Allen radiation belts and regions containing space debris, as well as interplanetary radiation and micrometeorite environments. To study these regions and to perform engineering studies to complement those aboard Clementine, the ISAS was equipped with an instrument pallet containing a number of experiments.

The Clementine ISAS consisted of a Thiokol Star-37FM solid rocket motor attached to an interstage adapter structure. The adapter was cylindrical and was wrapped with solar panels. The small instrument pallet with a mass of about 5 kg was attached to the inside adapter wall above the rocket motor. A simple transceiver system allowed communications with Earth. The adapter was spin-stabilized during the booster burn, but had no attitude control or determination.

The ISAS was equipped with three experiments which were also flown on the Clementine lunar orbiter. These were a radiation monitor, an instrument to determine damage coefficients of radiation-hard and -soft complemetary metal-oxide-semiconductor devices, and a dosimeter. Studies were also done on the radiation effects of types of devices flown on ISAS, including a linear charged coupled device (LCCD), an electrically erasable programmable read-only memory device (EEPROM), a field-programmable gate array (FPGA), and a static random access memory device (SRAM). Performance and calibration measurements were made of these devices throughout the flight to ascertain the effects of radiation. An orbiting meteorite and debris counter (OMDC) consisted of impact detectors which provided data on natural meteoroids and man-made debris in the near-Earth environment. Performance of other spacecraft systems was also monitored.