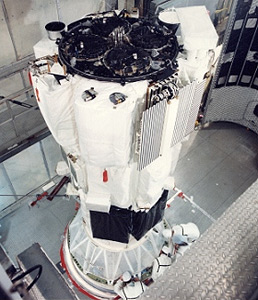 TVE (Thrusted Vector Experiment), a.k.a. Delta 181, was the second Delta / SDI mission. Delta 181 involved the placement of a Delta second stage in low-Earth orbit, but it included the deployment of two payloads as the object of a series of experiments in orbit. One of the payloads was a plume generator package (SPX) with a Star-13A motor, and the other was a science package containing eight test objects and four reference objects. A sensor module, consisting of a command and data handling system and seven scientific experiments, remained with the Delta's second stage to scan elements of both packages once they were deployed. The sensor module was equipped with ultraviolet, infrared, radar and laser sensors to gather a tremendous amount of data on the "signatures" generated by the deployed payloads. That data was transmitted via two wideband telemetry downlinks to stations on the ground. Data from approximately 100 ground-based sources funneled into the Cape via communications satellites. The mission required more than 200 radar tracking maneuvers over a period of two days, and recorded data continued to come in for about ten days after the experimental portion of the mission was completed. Put simply, Delta 181 presented the Eastern Range with one of the most complex support missions in history.

Concerning the launch itself, the countdown for the Delta 181 mission was picked up at 1557Z on 8 February 1988. It proceeded smoothly to lift-off at 2207:00Z. As the Delta-3910 booster climbed away from Pad 17B, the launch vehicle rolled out of its 115-degree launch azimuth into a flight azimuth of 94 degrees. The Delta's second stage was injected into a 166 × 222 km orbit inclined 28.7 degrees to the equator. Data was collected during the first seven orbits, then the second stage boosted itself into a 316 km circular orbit during its eighth revolution. During the ninth and tenth orbits, the sensor module's telemetry and tape recorder systems were verified. Over the next ten days, the sensor module transmitted its recorded data to designated ground stations in the Delta 181 support network. The mission was highly successful.