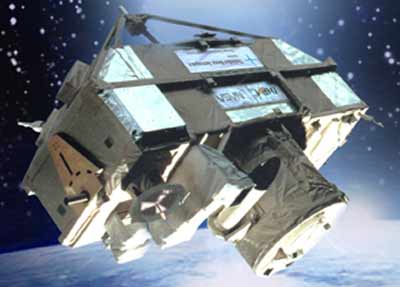 CRISTA-SPAS (Cryogenic Infrared Spectrometers & Telescopes for the Atmosphere - Shuttle Palette Satellite) is a limb-scanning satellite experiment, designed and developed by the University of Wuppertal to measure infrared emissions of the earth's atmosphere. Equipped with three telescopes and four spectrometers and cooled with liquid helium, CRISTA acquires global maps of temperature and atmospheric trace gases with very high horizontal and vertical resolution. The design enables the observation of small scale dynamical structures in the 15-150 km altitude region. CRISTA's prime scientific objective is the study of small-scale dynamical structures seen in the global trace gas distributions. The data are also used to test 3-D chemical-dynamic model predictions.

CRISTA is mounted on the free-flying ASTRO-SPAS satellite by DaimlerChrysler Aerospace which is then named CRISTA-SPAS, together with MAHRSI, an ultraviolet spectrograph from the Naval Research Laboratory in Washington, DC. The CRISTA-SPAS platform is launched with the U.S. Space Shuttle. In orbit it is released from the cargo bay by the manipulator arm and retrieved at the end of the mission.

CRISTA 1 was launched on 3 November 1994 with STS-66 Atlantis. Atmospheric measurements were obtained in the free-flying phase from November 4-12, 1994, travelling 50-100 km behind the Shuttle. On November 12 the satellite was retrieved and two days later returned to Earth. The STS-66 payload also included the SSBUV experiment and the ATLAS-3 instrument package.